Ine / KyotoLive the Fisher’s Life in Idyllic Ine: Stay in a traditional bayside boathouse, and discover a unique way of life shaped by the waves 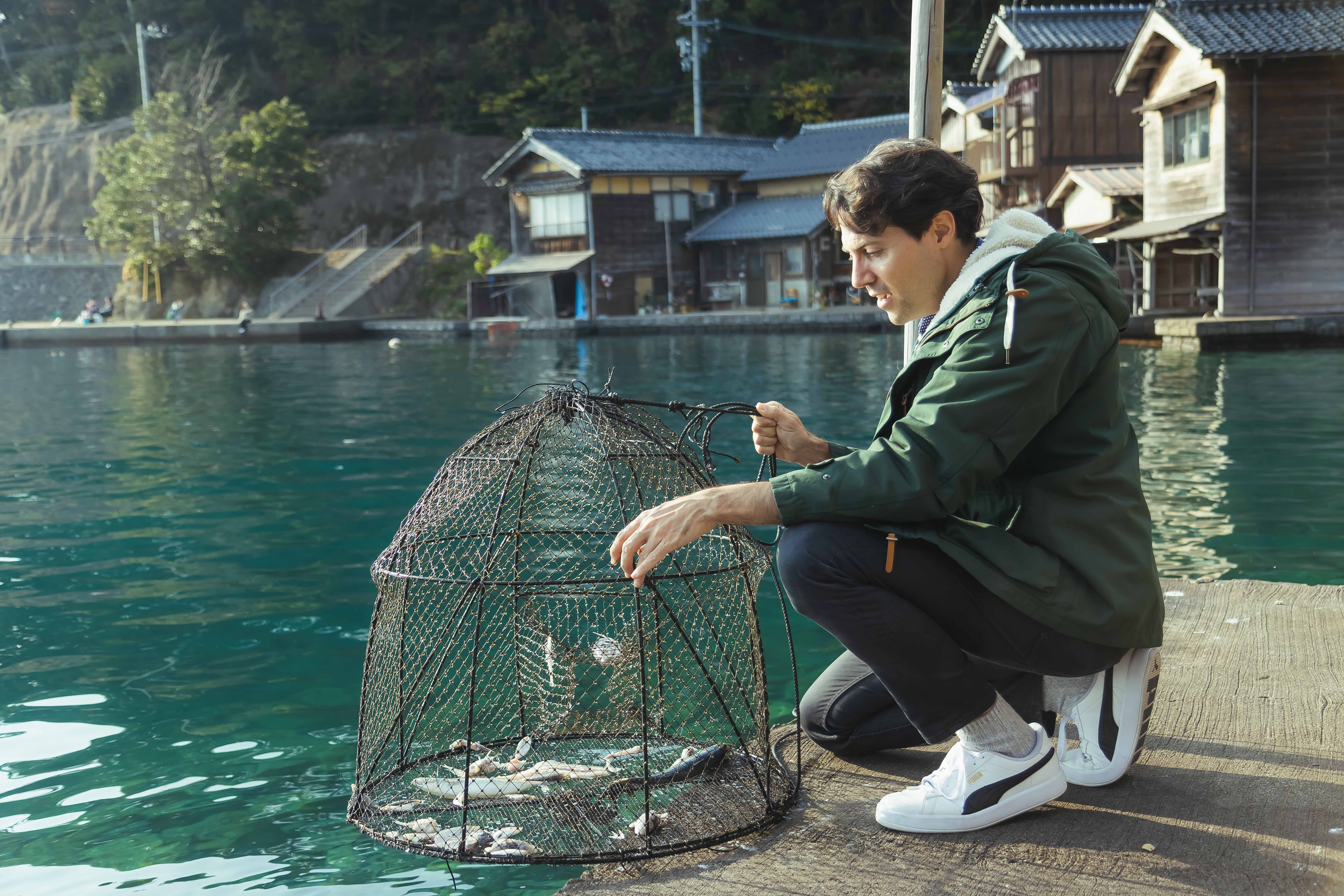 Located on the coast of the Sea of Japan in Kyoto Prefecture, Ine is a charming fishing village that has managed to preserve a centuries-old way of life with the sea. The surrounding mountains and a natural bay, guarded by the small island of Aoshima, afford protection from the rough waves and heavy winds that commonly batter other coastal areas along the Sea of Japan.

Ine is best known for its picturesque two-story wooden boathouses, known as funaya, that ring the water’s edge all around the bay. Some 230 of these distinctive and historic funaya have been preserved, thanks in part to the Japanese government’s selection of Ine in 2005 as one of the Important Preservation Districts for Groups of Traditional Buildings. 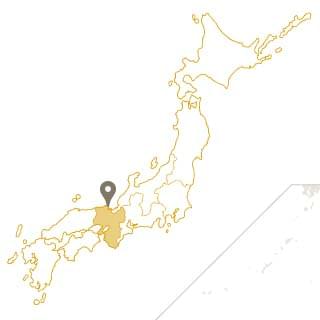 With just a narrow strip of land to live on between the mountains and the bay, Ine’s residents had to be creative to make the most of the available space. Most of them built a main house (known as an omoya) at the foot of the surrounding mountains and a funaya between the omoya and the bay, with the funaya serving as a windbreak for the omoya while also providing easy access to the water.

The old steeply-pitched thatched roofs have been replaced by today’s ubiquitous tile roofs. Also, the Funaya used to be a windowless structure, functioning simply like a dry dock for the old wooden boats, which would have rapidly decayed from mooring in salt water. Any remaining space in the funaya was used to dry linen nets or store fishing equipment and household goods.

But with the adoption of synthetic-fiber nets and fiberglass boats, less space is now needed. While the first floor is still a sort of open garage for the family’s fishing boat, the upper floor of the funaya has become a separate structure known as a hanare, which can be used as a guest room or storage space.

Though Ine has become popular for sightseeing, with the occasional café, restaurant, or inn, it is still far from being a tourist town. Stroll through the narrow streets, and you’ll see some of the village’s 2,000 residents going about their daily lives—for example, tending to their mondori (traps to catch fish) or ikesu (small net pens for keeping live fish in the seawater by the funaya).

Boarding a sightseeing boat for a cruise on the bay is an excellent way to catch another view of the funaya, one that is hard to appreciate from shore. The roughly thirty-minute cruise circles the bay, passing in front of the funaya as the boat operator points out notable buildings and interesting trivia about Ine—accompanied by a soundtrack of old folk melodies and a live chorus of screeching seagulls following above.

Stay overnight in a beautiful funaya

The best way to truly enjoy your time in Ine is by staying overnight in a funaya. Ine’s bay is like a community, where lots of different activities take place all through the day. Being in a funaya offers the excellent vantage point of a front-row seat to observe the quiet patterns of everyday life in the village.

Early in the morning, fishing boats head out to the deeper waters of the bay or beyond, returning with their haul just as the sun rises. Throughout the day, you can hear the swoosh of fishing lines being cast by shore-based fishermen and women. At night, the stars shine brightly when the sky is clear, and only the sound of the gently lapping bay water fills the air.

A small number of funaya have been converted into accommodations for travelers, with some being quite luxurious. From the outside, Funaya no Yado Kura blends in well with the neighboring funaya. But step inside, and you’ll find a bright, renovated, stylish interior. Facilities depend on your choice, but there are funaya with heated floors, hot-spring baths overlooking the bay, and large windows offering expansive views.

Though some funaya, like Funaya no Yado Kura, provide only rooms without meals, a full breakfast is served at Funaya Shokudo on the second floor of Ine’s Tourist Information Center. Lunch and dinner are available at restaurants around the town, such as Yoshimura, which is a short walk from the Tourist Information Center. This intimate restaurant, run by an active fisherman, serves fresh fish from Ine and nearby, along with local sake to wash it all down.

Even today, Ine remains a fishing town, with many locals owing their way of life to the bounty of the sea. The cold waters of the Sea of Japan are an ideal place to find delicious fish, with the fish here tending to have a higher fat content than those in other parts of the country.

Hashimoto Fishery is one local company that farms yellowtail, sea bream, and other fish inside Ine’s bay. The small family-run operation goes to great lengths to ensure that the fat content of the yellowtail is close to that of their wild counterparts. For example, they limit the number of yellowtail in each netted compartment and use high-quality feed for the fish.

The relatively calm waters allow the fisher crew to use a small fishing boat with an open deck. Upon reaching the different compartments of fish in the bay, the crew step out onto floating pontoons and scoop out the fish with small nets on poles, then transport their catch back to shore. The fish are checked, counted, and weighed before being delivered to restaurants in the town. Ine has no fishmongers, so accommodation, restaurants, and locals alike buy direct from the fishing port in the harbor every morning. The catch changes with the day so you never really know what you may find yourself dining on later that day.

A historic brewery with a modern twist

With a branch of its well-manicured pine tree sticking out above white-plastered walls, Mukai Sake Brewery is easily spotted among the funaya. The small brewery was founded in 1754 and is now operated by the fourteenth generation of the Mukai family.

Mukai Sake Brewery has stood out among other sake breweries for having a female toji (master brewer), who is the daughter of the current family head. Traditionally, toji and other workers engaged in the brewing process were exclusively male. Besides challenging gender roles, Mukai Kuniko has also challenged the traditional notion of sake taste and ingredients.

While overseeing production of the brewery’s signature products, like Kyo no Haru, Mukai also introduced a unique product branded Ine Mankai. Made with a reddish-purple heirloom rice known as kodai-mai, an original variety introduced to Japan from China over a millennium ago, this pink-colored sake takes on a light, fruity flavor that resembles that of a rose wine. It has been consumed by the Emperor and Empress of Japan and was served during the G20 Osaka Summit 2019.

Getting to Ine, Kyoto Prefecture:

Ine is a two-hour drive from central Kyoto, and the scenic route is an experience in itself. Alternatively, the JR Sanin line from Kyoto Station gets you to Amanohashidate Station in around two hours, and from there it is a one-hour bus ride to Ine. Ine is close enough to visit on a day trip from Kyoto, but it’s best to stay at least a night and live like the locals in order to really appreciate the tranquility of the village with its oceanside ambience. In addition to the boat cruise on the bay, there are many activities to enjoy in Ine, such as cycling around the funaya or sea kayaking along the rocky coastline near the open ocean.